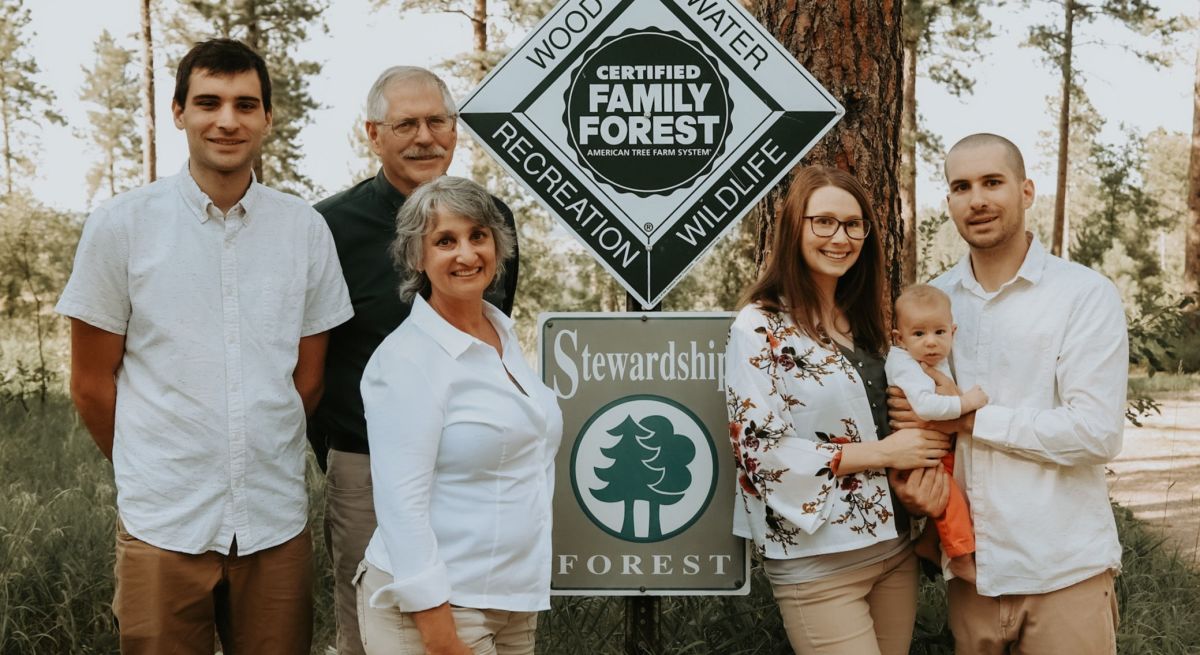 Mary and Bob with their family.

In the mid 1870’s, there were two ways to enter the Black Hills of South Dakota, on foot or on the back of a horse. By 1887, the effort to construct the first railroad into a piece of Lakota treaty land that settlers called the Piedmont Valley brought John Murray to the area. In July of that year, Murray purchased a large acreage, including the wooded slopes above the red dirt valley floor, for $675.

One hundred and thirty-four years later, the American Tree Farm System (ATFS), a program administered by the American Forest Foundation, has named Murray’s descendants as the 2021 National Outstanding Tree Farmers of the Year. Mary LaHood and Bob Burns, who manage the LaHood-Burns Family Forest with their children, were selected by an independent selection committee made up of ATFS partners, landowners, and past Regional and Outstanding Tree Farmer of the year finalists.

“The National Outstanding Tree Farmer of the Year is selected from the top nominations from all over the country and the LaHood-Burns Family Forest selection is a true testament to the hard work and many accomplishments on the Tree Farm and their leadership in promoting sustainable forestry on private forest lands throughout the region,” says Bob Bauer, chair of the Outstanding Tree Farmer of the Year committee.

Burns and LaHood are being recognized for decades of conscientious, pro-active, hands-on stewardship of the land and for their dedication and advocacy for family forest landowners.
“I can’t think of more deserving Tree Farmers,” adds Bill Coburn, Chairman of the South Dakota Family Forests Association who informed the couple of the news of their selection. “When I called them, they were up on their forest working. That says a lot about their incredible dedication.” 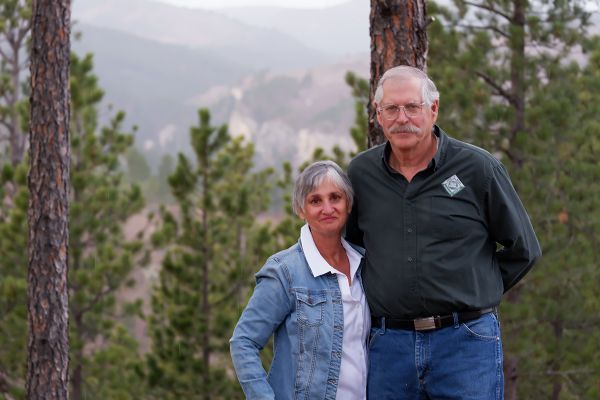 Bob Burns took over the property in 1969, following his father’s death, and began timber management informed by his study of environmental science at Rutgers University. Burns built an excavation company which specialized in land and stream improvements on public land. He used down time in the early years to manage the family forest on his own, government cost-share programs later enabled him to hire timber contractors to help with the work.

In 1986, Bob married Mary LaHood and the subsequent birth of three of their four children ushered in a period of slowed conservation work on the property. That all changed on August 15, 1994, when the lightning-caused Stagebarn Fire blew up around midnight on National Forest land bordering the LaHood-Burns property. Mary was in her last month of pregnancy with their fourth child. Bob rushed to the emergency fire headquarters set up in the local elementary school to help. His connections with local US Forest Service personnel and his intimate knowledge of the area became instrumental in laying out a fire attack plan. He spent 14 hours working with crews to put in almost two miles of fire line through the length of the Tree Farm and onto the adjacent land. A one mile long, one-hundred-foot-wide fuel break established seven years prior was instrumental in slowing the fire. Eighty acres of the farm burned, but lines held, and all the homes in the area were saved.

The experience focused Bob and Mary on the importance of forest health and on the advice and help of local professional forester they joined the American Tree Farm System initiating stewardship and timber management plans. They soon realized that treating their own property while adjacent land remained untreated would not be enough to reduce the chances of future catastrophic fire. So, Bob and a local forester reached out to the homeowners in nearby subdivisions to explain the benefits of a well-managed, fire-resistant forest adjacent to their homes and convinced them to allow heavy logging trucks to pass local gravel roads. As a result of those dialogues, many neighbors not only welcomed forest management and fuel reduction, and one adjoining landowner added eighty acres to the treatment area. Their ongoing advocacy continues to inspire as a new neighbor is taking steps to enter the Tree Farm system this year.

The LaHood-Burns family focuses on multiple uses that protect the timber stands, reduce wildfire danger, promote water quality, reduce the threat of mountain pine beetles, reduce noxious weeds, and enhance wildlife habitats while improving recreation such as camping and hiking. They have also worked closely with Forest Service on their properties bordering their farm and helped in the reduction of off-highway vehicles’ impact on pristine riparian areas.

But it’s not only about their efforts on their own forest. “They are doing a lot of impressive outreach and advocacy by giving back to their community to promote the values that tree farmers hold dear,” says Dr. Salem Saloom the 2010 ATFS Tree Farmer of the Year who visited the LaHood-Burns’ Family Forest as part of the selection process. “This really made them stand out.” 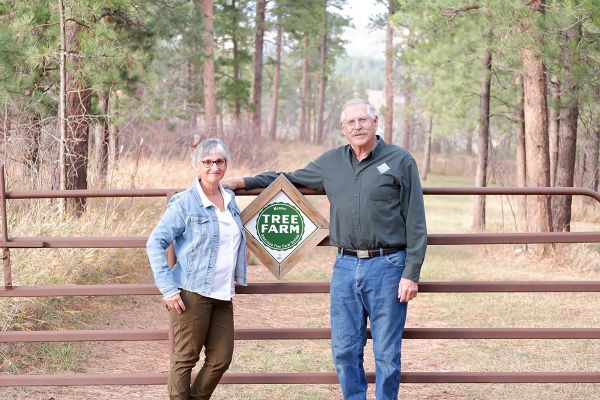 Mary and Bob in front of their ATFS sign on their property in South Dakota.

Bob and Mary have repeatedly opened their Tree Farm to tours and workshops with local, national, and international political leaders, policy makers, and regulators. They have also repeatedly testified and advocated on behalf of Tree Farmers at the South Dakota state legislature. Mary is the Executive Director and Treasurer of the South Dakota Family Forests Association and Bob serves on the board as Vice Chair and is chair of the Advocacy Sub-committee. Bob is past president of the Black Hills National Forest Advisory Board (one of only two similar boards in the nation) and past president of the Norbeck Society (a local environmental conservation group.)

But the pair of Tree Farmers remain humble despite the recognition, they are quick to point out many others who added to their success over the years. “We’re incredibly honored, but it needs to be said that this award is not just about us, it’s for the people who have helped us and the people we have learned from over the years,” says LaHood.

John Murray might be proud to know that despite forest fires, flash floods, a timber theft in the 1930’s, and ever-encroaching urban sprawl, more than one hundred years later a spirit of community, resourcefulness, and dedication continue to empower his descendants in their conservation of a rich forest of ponderosa pines, mix conifers and deciduous trees perched above the Piedmont Valley in western South Dakota.

About the Author: Mike Ray runs a small Tree Farm with his family in the Black Hills of South Dakota on the land where he grew up. He holds a degree in geology from South Dakota Mines. He was a public radio journalist for 25 years prior to becoming a science communicator at his alma mater. 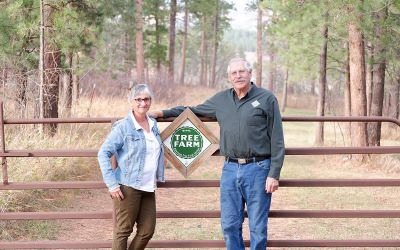 The American Forest Foundation and the American Tree Farm System are excited to announce the 2021 National Outstanding Tree Farmers of the Year, Mary LaHood and Bob Burns of South Dakota.

The American Forest Foundation and the American Tree Farm System are excited to announce the 2021 National Outstanding Tree Farmers of the Year, Mary LaHood and Bob Burns of South Dakota. 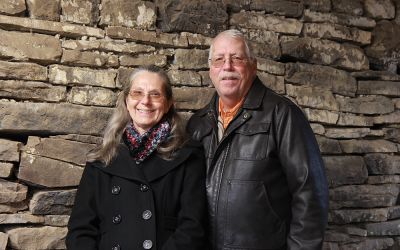 When the time to retire came, Tony and Debbie Wambaugh were excited to be able to move to their family's land. Their main focus was on farming but they hadn't considered the potential of the 126 forested acres. An ad from the Family Forest Carbon Program changed all that.